The AIDA-SHM solution is supported by the European Space Agency (https://business.esa.int/projects/aida-shm).

The highly innovative elements of AIDA-SHM are:

Passive acoustic emission is scientifically recognized as a non-invasive technique (it does not involve any input of energy into the materials), that allows to identify and locate the weak points of a structure, and therefore it is useful for real time monitoring of metal and composite structures. In fact, in the solid materials, the lesions (even if microscopic) expanding spontaneously release energy in the form of particular ultrasonic signals, called acoustic emissions. Several studies establish that the acoustic emission phenomenon depends on the damage type in the material. In general, during the evolution of damage, there is an increase in acoustic emissions both in number and in amplitude and a reduction in frequencies in the advanced stages of the process. The latter phenomenon suggests the transition from a micro-cracking regime to one in which macro-cracks are formed and at the end there is a structural collapse.

The acoustic emission is based on the acquisition of ultrasonic signals, usually with a frequency between 20 kHz and 1 MHz, spontaneously emitted by a material under stress due to irreversible effects, such as damage, micro-cracking, degradation, corrosion. The interested acoustic signals, releasing during the check, are due to the presence of structural defects or damage to the structure. If a component is subjected to stress, the pressure is spontaneously generated in the weak point, producing an acoustic impulse. All solids have a certain elasticity: they deform under the action of external loads and return to the initial configuration when the external loads are removed. The maximum tolerable effort and the consequent elastic deformation depend on the capability to store elastic energy. Overcoming the elastic limit, in fragile materials, the fracture occurs immediately. However, in materials with high plasticity, the fracture occurs only after deformation. If the material, subjected to a pulling load, has a defect (e.g. in welded joints, a non-metallic inclusion, a gas bubble), the damage will most likely occur around these native defects since they are likely to be the points most strongly stressed. In fact, near the defects, the stress field is further amplified. In heterogeneous materials (rocks, concrete, composites) the fracture occurs at the peak of progressive damage due to the applied loads or the severity of the environmental conditions (corrosion, degradation, …). In particular, the micro fracturing process occurs together with a fast dislocation motion which is associated with a spontaneous rapid release of energy in the form of transient elastic waves, or acoustic emissions (AE). The acoustic emission event manifests itself as an elastic wave that propagates through the material towards the surface of the element and can be detected and recorded by the sensors (AE sensors) by applying to the structure surface.

The artificial intelligence algorithms with automatic learning, applied to the integrated processing of the signals coming from the AE sensors and from the other typical sensors of the structural monitoring (accelerometers, strength gauge, temperature, humidity, …), learn to “know” the specific physical features of the product, to recognize the  type and severity of the signals collected by the sensors and therefore they are able to carry out an early diagnosis of incipient structural damage by capturing precursor signs of fractures. Furthermore, measuring the arrival distribution of the acoustic signals to the various sensors overtime and using mathematical algorithms, it is possible to locate the source of the acoustic emission. Therefore, the combination of these techniques allows to predict (and so prevent) catastrophic events, to optimize and improve the effectiveness of maintenance activities, providing information on the location of the damage and consequently reducing maintenance costs.

The AI engine of AIDA-SHM uses the knowledge acquisition paradigms, which are able to:

The transfer of the data collected by the AIDA-SHM sensors is obtained using an edge computing – IoT satellite architecture, in order to extend the monitoring and prediction capabilities to large structures (bridge, viaduct) for which the monitoring requires a sensors extensive network.

The satellite connection is currently the only wireless connection able to guarantee the service levels and bandwidth necessary for the collection and real-time transfer of data coming from the sensors, positioned in strategic points of the structures. 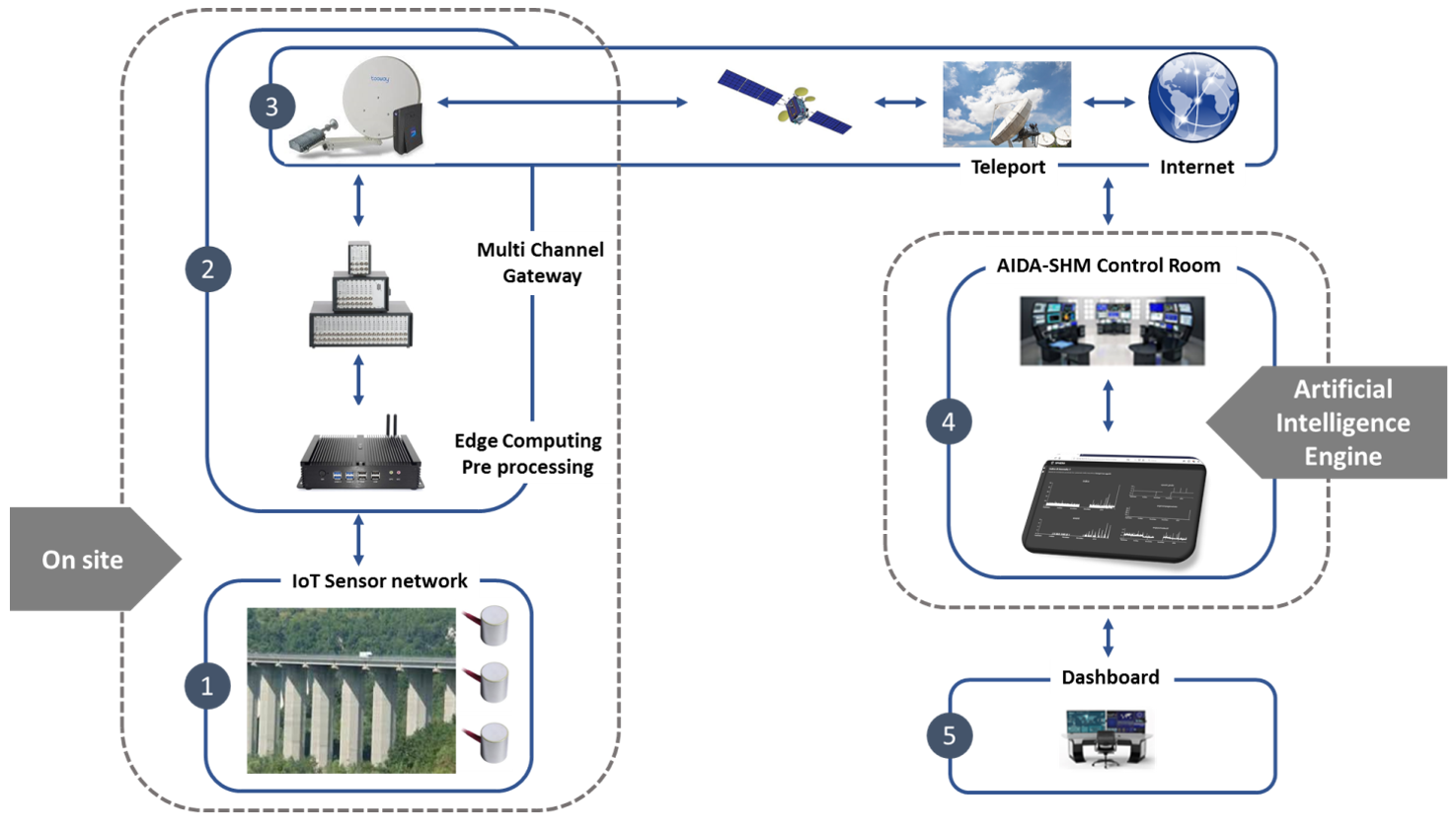 The AE sensor network is strategically placed along the structure, e.g. a viaduct. This network can be integrated with an existing network of other types of sensors, such as temperature, position, inclination, accelerometer, etc. AE sensors generally require a wired connection with the multichannel DAQ device, which provides the correct power to the preamplifiers built into the sensors through the same coaxial cable.

The analog data produced by the sensors are acquired and digitized through a multi-channel system. Thus, the obtained historical series are locally pre-processed in the time and frequency domains (edge module of AIDA-SHM), ready for the next analysis carried out by the artificial intelligence engine. The pre-processing phase carried out by the “edge computing” module is necessary to avoid transferring the large amount of data coming directly from the high frequency sampling (500kH) of the AE sensors, which have to be able to detect the signals in the ultrasonic band.

The pre-processed data is transmitted to the “Central” module of AIDA-SHM, via satellite connection.

The “Central” module of AIDA-SHM (which can be on premise in the customer’s control room, or on a Cloud server), processes all the received data, both those collected by the sensors and relating to the manufact, and the control data of the satellite connection and the “edge-computing” infrastructure module, to guarantee the reliability and continuity of the system.

The information provided by AIDA-SHM can be viewed in a Dashboard accessible via a multi-channel WEB interface. Despite the technological complexity of the solution, the information is summarized in high-level functions that are logically consistent with those coming from conventional structural monitoring campaigns. For the use of the system, therefore, users are not required to have specific skills in addition to those typical of structural monitoring.

The output data of the artificial intelligence engine can be classified into the following types of information:

Every time the system detects the presence of a signal related to the occurrence of a possible damage (formation of a crack, detachment of the steel from the concrete, presence of unexpected structural discontinuities) an alarm signal is generated which is stored and subjected to the attention of the user in the preferred mode (console, SMS notification, email) and it is also possible to activate M2M actions (e.g. open a ticket, create a task, etc.).

When the “Training” phase is completed (during which AIDA-SHM “learns” the dynamics of the signals coming from the installed sensors on the structure and builds the interpretative models), every time it receives a signal that it is different from its “normal” interval, an anomaly message will be generated. Unlike sentinel signals, which require push notification in a short time, anomalies have a historical value, they are therefore recorded and communicated periodically to the customer, with a periodicity that can be configured according to user requirements.

The system evaluates the content of the signals coming from the AE sensors and compares them with the historical ones acquired in a “long” window which is sufficient to identify the structural changes. The analysis carried out here is different from the previous two because in this case slow changes, mainly related to the aging of the structure, have to be evaluated. AIDA-SHM generates and updates on a monthly scale a “health index” which takes into account the occurrence of “anomalies” on a very long time scale. 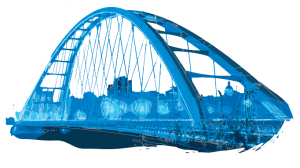